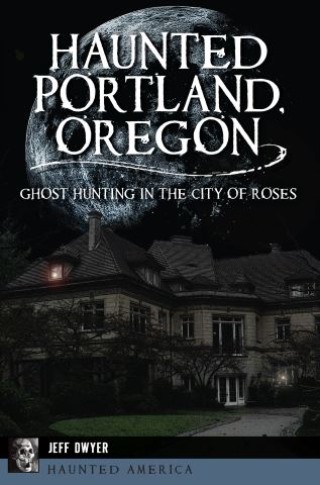 Ghost Hunting in the City of Roses

This addition to the Haunted America series offers armchair entertainment and open-road adventure for casual and serious ghost hunters as well as tourists who seek a lively twist to local history. It is a detailed book about ghostly places that are accessible to the public.

Jeff Dwyer is a third-generation Californian, born in the heart of the Bay Area. Before pursuing medical sciences at the University of California, Berkeley and the University of Southern California, he was a commercial diver and researcher of underwater performance, funded by the Office of Naval Research and the U.S. Navy Experimental Diving Unit.

After earning two master of science degrees in kinesiology and physical therapy and a doctorate in exercise physiology, he taught at the University of Hawaii's medical school, Duke University School of Medicine, and the University of Southern California Wrigley Marine Science Center and medical school. He works as a clinical specialist in cardiology, conducting a cardiac rehabilitation program and supervising diagnostic laboratories focused on heart disease.

Fascinated by ghost lore since boyhood, Dwyer rekindled his interest in writing about paranormal phenomena after many years of clinical practice involving work with dying patients and their families as well as hospital staff, many of whom claimed witness to paranormal events. Numerous experiences with ghosts in hospitals, cemeteries, and historic sites around the Bay Area led to extensive research that culminated in his first book, Ghost Hunter's Guide to the San Francisco Bay Area.

While working at Duke University School of Medicine and with the U.S. Navy Experimental Diving Unit, Dwyer was able to explore every southern state. He examined antebellum mansions, battlefields, and cemeteries in addition to scuba diving on several shipwrecks. During his visits to New Orleans, he became fascinated with the city's history, culture, and people and conducted investigations of paranormal activity at several sites.