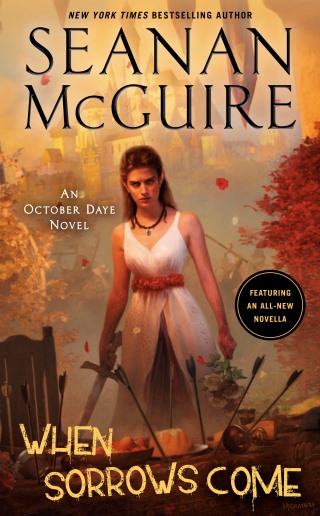 It's hard to be a hero. There's always something needing October "Toby" Daye's attention, and her own desires tend to fall by the wayside in favor of solving the Kingdom's problems. That includes the desire to marry her long-time suitor and current fiancé, Tybalt, San Francisco's King of Cats. She doesn't mean to keep delaying the wedding, it just sort of...happens. And that's why her closest friends have taken the choice out of her hands, ambushing her with a court wedding at the High Court in Toronto. Once the High King gets involved, there's not much even Toby can do to delay things...

...except for getting involved in stopping a plot to overthrow the High Throne itself, destabilizing the Westlands entirely, and keeping her from getting married through nothing more than the sheer volume of chaos it would cause. Can Toby save the Westlands and make it to her own wedding on time? Or is she going to have to choose one over the other?

Seanan McGuire: Seanan McGuire is a Hugo, Nebula, and Locus award-winning author. October Daye is her first urban fantasy series, and InCryptid her second, both of which have put her on the New York Times bestseller list. She is the first person to be nominated for five Hugo Awards in a single year.