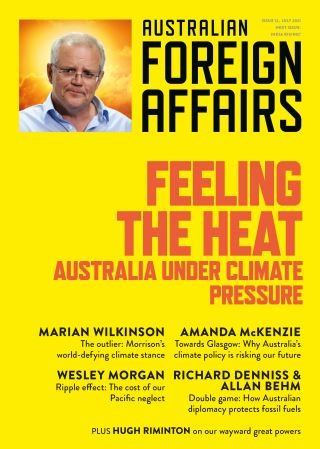 “Australia’s climate and energy policy is a ‘toxic time bomb’ . . . Now Morrison, feeling the heat from Australia’s allies, from growing numbers in the business community and from a majority of voters, needs to work out how he will handle that bomb.” MARIAN WILKINSON

The twelfth issue of Australian Foreign Affairs examines the growing pressure on Australia as global and regional powers adopt tough measures to combat climate change. Feeling the Heat looks at the consequences of splitting from the international consensus, and at how a climate pivot by Canberra could unlock new diplomatic and economic opportunities.


PLUS Correspondence on AFA11: The March of Autocracy from Fergus Ryan, Kevin Boreham and Yun Jiang.