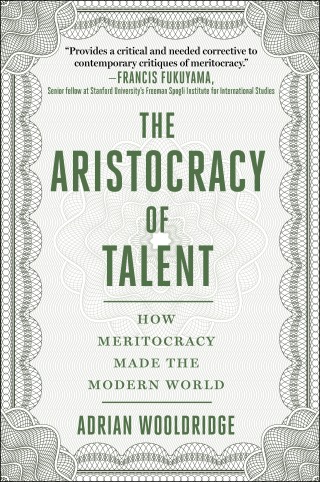 The Aristocracy of Talent

How Meritocracy Made the Modern World

Meritocracy: the idea that people should be advanced according to their talents rather than their birth. While this initially seemed like a novel concept, by the end of the twentieth century it had become the world's ruling ideology. How did this happen, and why is meritocracy now under attack from both right and left?

In The Aristocracy of Talent, esteemed journalist and historian Adrian Wooldridge traces the history of meritocracy forged by the politicians and officials who introduced the revolutionary principle of open competition, the psychologists who devised methods for measuring natural mental abilities, and the educationalists who built ladders of educational opportunity. He looks outside western cultures and shows what transformative effects it has had everywhere it has been adopted, especially once women were brought into the meritocratic system.

Wooldridge also shows how meritocracy has now become corrupted and argues that the recent stalling of social mobility is the result of failure to complete the meritocratic revolution. Rather than abandoning meritocracy, he says, we should call for its renewal.

Adrian Wooldridge: Adrian Wooldridge is the political editor and a columnist at the Economist. He earned a doctorate in history from Oxford University, where he was a Fellow of All Souls College. He is the author of ten previous books, including Capitalism in America co-written with Alan Greenspan and seven co-written with John Micklethwait: The Wake-Up Call, The Witch Doctors, A Future Perfect, The Company, The Right Nation, God is Back, and The Fourth Revolution.