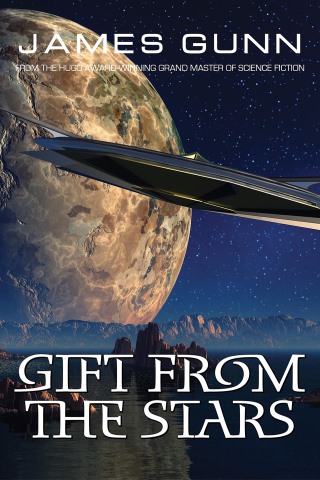 Gift From The Stars

The age-old question about alien existence and human contact is explored in a new way in this collection of six novellas, previously anthologized in Analog magazine. When disillusioned aerospace engineer Adrian Mast buys a book at a remainder sale, the last things he expects to find in its appendix are alien spacecraft designs.With the help of the bookstore owner, Adrian tracks down the author—only to find him in a mental institution anguishing over the intentions of the aliens who sent the designs to him. By bluffing a bureaucrat intent on thwarting their progress, the two friends continue their quest for the stars and go ahead with the spacecraft designs. Having successfully launched their ship 15 years later, the questions that remain are: What were the intentions of the aliens? and Is mankind ready to face what's out there?

James Gunn: James Edwin Gunn was an American science fiction writer, editor, scholar, and anthologist. His work as an editor includes the six-volume Road to Science Fiction anthology series. He won the Hugo Award for “Best Related Work” in 1983 and he has won or been nominated for several other awards for his non-fiction works in the field of science fiction studies. He was inducted by the Science Fiction and Fantasy Hall of Fame in 2015. He was a professor emeritus of English and the Founding Director of the Center for the Study of Science Fiction at the University of Kansas.