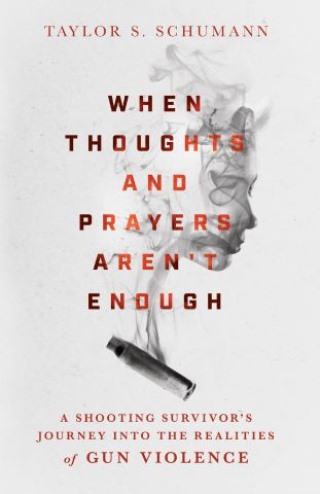 When Thoughts and Prayers Aren't Enough

A Shooting Survivor's Journey into the Realities of Gun Violence

Taylor Schumann never thought she'd be a victim of gun violence. But one spring day a man with a shotgun walked into her workplace and opened fire on her. While she survived, she was left with permanent wounds, both visible and invisible. In When Thoughts and Prayers Aren't Enough, Taylor invites us to see what it means to be a survivor after the news vehicles drive away and the media moves on. Healing is slow and complicated. As she suffered through surgeries, grueling rehabilitation, and counseling to repair the physical injuries and emotional trauma, she came face to face with the deep and lasting impact of gun violence. As she began grappling with the realities, Taylor experienced another painful truth: Christians have largely been absent from this issue. Gun violence undercuts God's vision of abundant life and community—and the silence of the church rings loudly in the ears of survivors and families of victims. Taylor weaves her own incredible story of survival and recovery into a larger conversation about gun violence in our country. With compassion and honesty, she encourages readers to reconsider their own engagement with the issue and to join her in envisioning a more hopeful, safer future for our nation. Move beyond thoughts and prayers and enter into grace-filled dialogue and action.

Taylor S. Schumann: Taylor S. Schumann is a survivor of the April 2013 shooting at a college in Christiansburg, Virginia. She is a writer and activist whose writing has appeared in Christianity Today, Sojourners, and Fathom. She is a contributor to If I Don't Make It, I Love You: Survivors in the Aftermath of School Shootings. Taylor and her family live in Charleston, South Carolina.