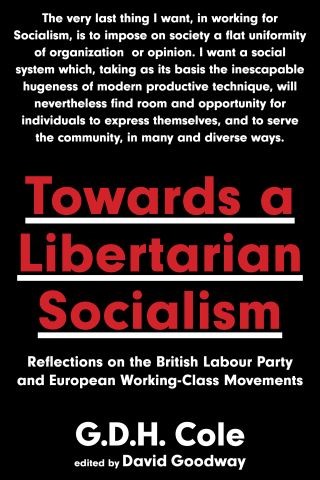 Towards A Libertarian Socialism

Reflections on the British Labour Party and European Working-Class Movements

A collection of essays from a revered member of the British Labour Party. What distinguished Cole was his distance from traditional marxist and bureaucratic labour approaches. Neither a Communist nor a Social Democrat (nowadays referred to as a Democratic Socialist a la Bernie Sanders) Cole desired a socialism that centered freedom for workers—an end to capitalist exploitation, workers’ management of production, and an expanding democracy in all realms of social life.

G.D.H. Cole (1889–1959) was one of the twentieth century’s outstanding socialist writers and thinkers. From the 1920s until his death he was the pre-eminent Labour intellectual, surpassing Harold Laski and R.H. Tawney in the proliferation of his publications and general omnipresence.