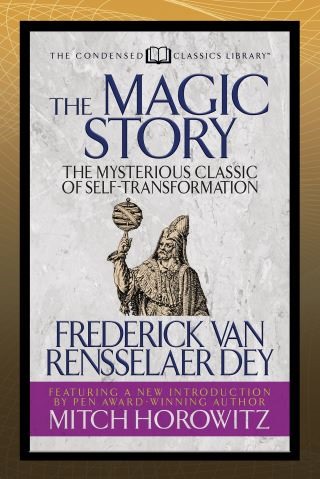 The Mysterious Classic of Self-Transformation

Discover the Mysterious “You” Who Cannot Fail

The Magic Story—one of the most intriguing and powerful works of inspiration ever written—reveals the unknown but entirely real you: a stronger, resilient, and more capable being who shadows your daily existence and requires only that you invite it in.

In this imaginary but starkly real tale, author Frederick van Rensselaer Dey (1861–1922) reveals this “plus-entity” and how to encounter it. Originally published in 1900, Dey’s beguiling and instructive story is a “magic key” for all who wish to become the person they are truly intended to be.

This volume includes the complete text, an original publisher’s preface, and a new introduction by spiritual thinker Mitch Horowitz making it the signature edition of Dey’s mysterious classic.

“Since earliest childhood,” Mitch writes in the introduction, “you have probably felt, as I have, that you are two selves. Be guided by the principle of The Magic Story: select the self that builds you. It represents a more powerful choice than may at first appear.”

Frederick van Rensselaer Dey: Frederick Van Rensselaer Dey (February 10, 1861 – April 25, 1922) was an American dime novelist and pulp fiction writer. Born in Watkins Glen, New York, to David Peter Dey and Emma Brewster Sayre, he attended the Havana Academy and later graduated from the Columbia University Law School. He practiced law and was a junior partner of William J. Gaynor, who went on to become the mayor of New York. Dey took up writing while recovering from a serious illness and his first full-length story was written for Beadle and Adams in 1881. “The Magic Word” and “The Magic Story,” written in 1899, were extremely popular and passed through some twenty editions. He was married twice and had two children.|||Mitch Horowitz is a PEN Award-winning historian whose books include Occult America; The Miracle Club; and the G&D titles The Miracle Habits and The Miracle Month. Twitter: @MitchHorowitz Instagram: @MitchHorowitz23