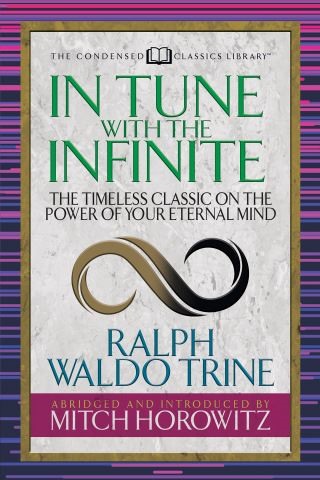 In Tune With the Infinite (Condensed Classics)

The Timeless Classic on the Power of Your Eternal Mind

Discover Your Hidden Reservoirs of Power

Ralph Waldo Trine’s In Tune With the Infinite is one of the most significant works of mind-power ever published. When the book first appeared in 1897 few Americans had heard terms like “Law of Attraction,” “Higher Power,” or “Positive Thinking”—Trine introduced these themes and others into mainstream life, teaching millions how to tap the creative faculties of higher thought.

Now, historian Mitch Horowitz condenses and reintroduces Trine’s masterwork for a new generation of readers. In this book, you will discover the simple, persuasive, and alluring lessons that popularized transcendental thought throughout the world. What’s more, you will learn how to use the mystical forces within you for the betterment of yourself and those you love.

Ralph Waldo Trine, Mitch writes in his introduction, “brought to everyday Americans ideas that were jarring, fresh, anti-mainstream, and transcendent. That such themes of spiritual possibility sound so familiar to us in the twenty-first century is testament to the author’s legacy.”

Ralph Waldo Trine: Ralph Waldo Trine (October 26, 1866 – November 8, 1958) was an American philosopher, author, and teacher. He wrote many books on the New Thought movement. Trine was a close friend of Henry Ford and had several conversations with him about success in life. Trine attended several different colleges and universities. His studies were on writing, journalism, history, and social science. He took up work as a journalist and eventually became an author of many books in philosophy.|||Mitch Horowitz is the PEN Award-winning author of books including Occult America and The Miracle Club. A writer-in-residence at the New York Public Library and lecturer-in-residence at the University of Philosophical Research in Los Angeles, Mitch introduces and edits G&D Media’s line of Condensed Classics and is the author of the Napoleon Hill Success Course series, including The Miracle of a Definite Chief Aim, The Power of the Master Mind, and Secrets of Self-Mastery. His G&D titles include The Miracle Habits and The Miracle Month. Twitter: @MitchHorowitz | Instagram: @MitchHorowitz23