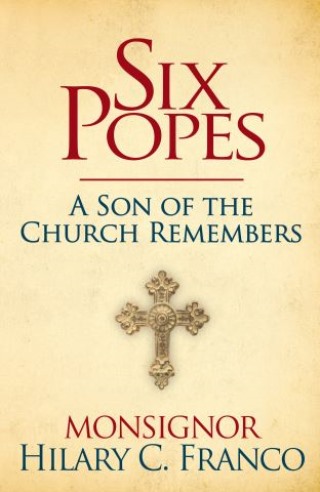 A Son of the Church Remembers

WHY-TO-BUY: Both the rich memoir of a "poor country priest" – who grew-up in the Bronx! – who forged deep and meaningful friendships with many of the most important religious figures in the Catholic Church, and a history of modern Catholicism and faith as seen through the eyes of a man who was a personal witness to events and changes of the 20th Century that continue to shape the Church and the world.

FUN FACT(S): Monsignor Franco was friends with 3(!) Saints…but when they were just regular people/Popes.

There are an estimated 1.2 billion Roman Catholics in the world, according to Vatican figures. More than 40% of the world's Catholics live in Latin America - but Africa has seen the biggest growth in Catholic congregations in recent years.

Hilary C. Franco: Monsignor Hilary Franco (New York, NY) was ordained a priest in Rome at the young age of 22 and received a doctorate in Biblical Theology from the Pontifical Lateran University in Rome, among other degrees. He served in the Parish of Our Lady of Mount Carmel, St. Dominic’s in the Bronx, and Assumption Church in Staten Island. He was also a member of the Board of Editors of World Mission magazine and also contributed Biblical articles to the New Catholic Encyclopedia. He then served in the Diplomatic Corps of the Vatican at the Apostolic Delegation in Washington D.C. and was named an official of the Prefecture of the Economic Affairs of the Holy See in the Vatican. After two years, he was named Official of the Congregation for the Clergy and was in charge of the English desk for 24 years, which he initiated. He served as Judge of the Interocean Ecclesiastical Tribunal and was named Monsignor in 1971 and Prelate of his Holiness in 1981. An active member of the Catholic Biblical Association of America, he has been the recipient of several international awards which he shared with the Nobel Peace Prize Laureate, Mother Teresa. The Monsignor is the author of BISHIP SHEEN MENTOR AND FRIEND and a frequent contributor to Newsmax Magazine & TV. The author lives & works in the New York City metro area.