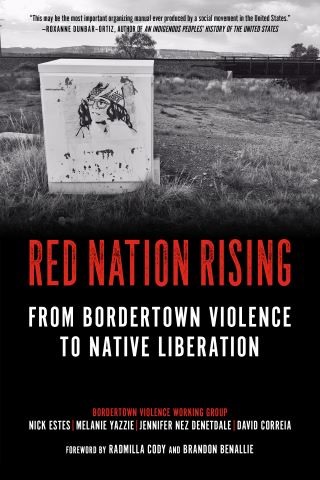 From Bordertown Violence to Native Liberation

Red Nation Rising is the first book ever to investigate and explain the violent dynamics of bordertowns. Bordertowns are white-dominated towns and cities that operate according to the same political and spatial logics as all other American towns and cities. The difference is that these settlements get their name from their location at the borders of current-day reservation boundaries, which separates the territory of sovereign Native nations from lands claimed by the United States.

Bordertowns came into existence when the first US military forts and trading posts were strategically placed along expanding imperial frontiers to extinguish indigenous resistance and incorporate captured indigenous territories into the burgeoning nation-state. To this day, the US settler state continues to wage violence on Native life and land in these spaces out of desperation to eliminate the threat of Native presence and complete its vision of national consolidation “from sea to shining sea.” This explains why some of the most important Native-led rebellions in US history originated in bordertowns and why they are zones of ongoing confrontation between Native nations and their colonial occupier, the United States.

Despite this rich and important history of political and material struggle, little has been written about bordertowns. Red Nation Rising marks the first effort to tell these entangled histories and inspire a new generation of Native freedom fighters to return to bordertowns as key front lines in the long struggle for Native liberation from US colonial control. This book is a manual for navigating the extreme violence that Native people experience in reservation bordertowns and a manifesto for indigenous liberation that builds on long traditions of Native resistance to bordertown violence.

Nick Estes (Kul Wicasa) is assistant professor of American Studies at the University of New Mexico. He organizes with the Red Nation, an indigenous-led leftist organization committed to indigenous liberation. He is also part of the collective for Abolition: A Journal of Insurgent Politics. His advocacy and research focus on indigenous resistance, anticolonialism, abolition, decolonization, and anticapitalism. He is the author of Our History Is the Future: Standing Rock versus the Dakota Access Pipeline, and the Long Tradition of Indigenous Resistance (Verso, 2019).

Melanie K. Yazzie (Diné) is an assistant professor in the Departments of Native American Studies and American Studies at the University of New Mexico. She organizes with the Red Nation, an indigenous-led leftist organization committed to indigenous liberation. She is lead editor of Decolonization: Indigeneity, Education & Society, an international journal committed to public intellectualism and social justice.

Jennifer Nez Denetdale (Diné) is a professor of American Studies at the University of New Mexico who teaches courses in critical indigenous studies, indigenous gender and sexuality, and Navajo studies. She is a strong advocate for Native peoples and serves as chair of the Navajo Nation Human Rights Commission. She is the author of Reclaiming Diné History: The Legacies of Navajo Chief Manuelito and Juanita.

David Correia is Associate Professor of American Studies at the University of New Mexico. He is the author of Properties of Violence: Law and Land Grant Struggle in Northern New Mexico (University of Georgia Press, 2013), and co-author of Police: A Field Guide (Verso, 2018).