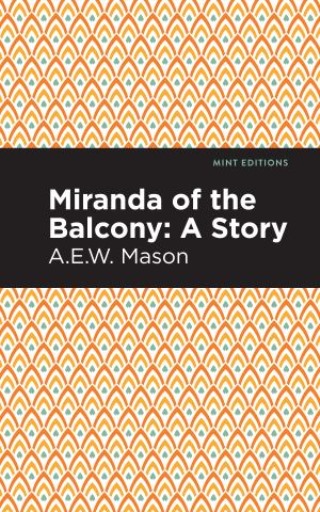 Miranda of the Balcony

Originally published in 1899, this vintage love story centers the plight of an isolated widow and the unsuspecting gentleman who tries to win her heart. Despite increasing odds, the couple fights to find their way to one another. Miranda Warriner is the widow of Ralph Warriner, a man whose life was full of secrets and lies. She lives in a small town near Gibraltar where she catches the eye of the dashing Luke Charnock. He is immediately smitten and captivated by her beauty. Unfortunately, their potential union is disrupted by a series of obstacles, some of which are linked to Miranda’s late husband. Miranda of the Balcony: A Story is an emotional rollercoaster led by a charming hero and heroine. A.E.W. Mason delivers an enthralling underdog tale that puts the protagonists through a series of unexpected trials. It is an enduring story about the unwavering power of love. With an eye-catching new cover, and professionally typeset manuscript, this edition of Miranda of the Balcony: A Story is both modern and readable.

A.E.W. Mason (1865-1948) was an English novelist, short story writer and politician. He was born in England and studied at Dulwich College and Trinity College, Oxford. As a young man he participated in many extracurricular activities including sports, acting and writing. He published his first novel, A Romance of Wastdale, in 1895 followed by better known works The Four Feathers (1902) and At The Villa Rose (1910). During his career, Mason published more than 20 books as well as plays, short stories and articles.