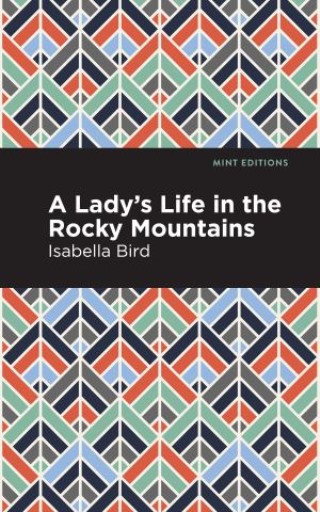 A Lady's Life in the Rocky Mountains

A Lady's Life in the Rocky Mountains (1879) is a work of travel literature by British explorer Isabella Bird. Adventurous from a young age, Bird gained a reputation as a writer and photographer interested in nature and the stories and cultures of people around the world. A bestselling author and the first woman inducted into the Royal Geographical Society, Bird is recognized today as a pioneering woman whose contributions to travel writing, exploration, and philanthropy are immeasurable. In 1872—after a year of sailing from Britain to Australia and Hawaii—Isabella Bird journeyed by boat to San Francisco before making her way over land through California and Wyoming to the Colorado Territory. There, she befriended an outdoorsman named Rocky Mountain Jim, who guided her throughout the vast wilderness of Colorado and accompanied her during a journey of over 800 miles. Traveling on foot and on horseback—Bird was an experienced and skillful rider—the two formed a curious but formidable pair, eventually reaching the 14,259 foot (4346 m) summit of Longs Peak, making Bird one of the first women to accomplish the feat. A Lady's Life in the Rocky Mountains, Bird’s most iconic work, was a bestseller upon publication, and has since inspired generations of readers. With a beautifully designed cover and professionally typeset manuscript, this edition of Isabella Bird’s A Lady’s Life in the Rocky Mountains is a classic of American literature and travel writing reimagined for modern readers.

Isabella Bird (1831-1904) was a British writer, explorer, photographer, and naturalist. Born in Yorkshire, Bird suffered from a spinal ailment from a young age. On her doctor’s recommendation, Bird’s parents facilitated an adventurous life for their young daughter, traveling throughout Scotland, educating her in botany and other scientific subjects, and teaching her to ride horses. These experiences and her need for exercise and fresh air inspired a life of adventure. Bird travelled to America in 1854, writing letters home that would form the material for her first book, An Englishwoman in America (1856). In 1872, Bird sailed to Australia and Hawaii before journeying to Colorado, where she explored over 800 miles of the Rocky Mountains and began her most famous work of travel literature, A Lady’s Life in the Rocky Mountains (1879). In 1878, she traveled to Japan, China, Korea, Singapore, and Vietnam before returning to Britain to marry Dr. John Bishop, a surgeon. When he died in 1886, leaving Bird a large inheritance, she left home once more to explore India, Persia, Kurdistan, Turkey, Iraq, and Iran. After years on the road as a missionary and healthcare worker, having achieved success and popularity as a travel writer and photographer, Bird was made the first woman member of the Royal Geographical Society in 1892.