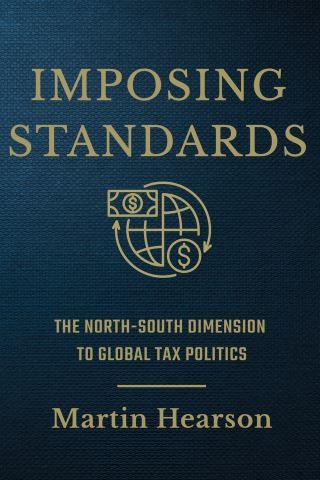 In Imposing Standards, Martin Hearson shifts the focus of political rhetoric regarding international tax rules from tax havens and the Global North to the damaging impact of this regime on the Global South. Even when not exploited by tax dodgers, international tax standards place severe limits on the ability of developing countries to tax businesses, denying the Global South access to much-needed revenue. The international rules that allow tax avoidance by multinational corporations have dominated political debate about international tax in the United States and Europe, especially since the global financial crisis of 2007–2008.

Hearson asks how developing countries willingly gave up their right to tax foreign companies, charting their assimilation into an OECD-led regime from the days of early independence to the present day. Based on interviews with treaty negotiators, policymakers and lobbyists, as well as observation at intergovernmental meetings, archival research, and fieldwork in Africa and Asia, Imposing Standards shows that capacity constraints and imperfect negotiation strategies in developing countries were exploited by capital-exporting states, shielding multinationals from taxation and depriving nations in the Global South of revenue they both need and deserve.

Thanks to generous funding from the Gates Foundation, the ebook editions of this book are available as Open Access volumes from Cornell Open (cornellopen.org) and other repositories.