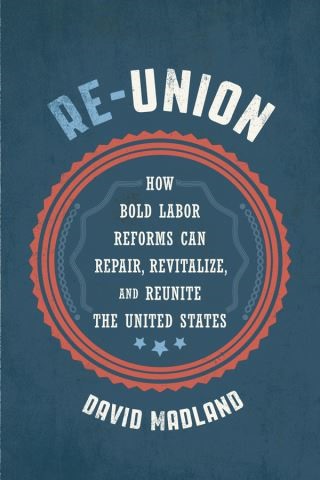 How Bold Labor Reforms Can Repair, Revitalize, and Reunite the United States

In Re-Union, David Madland explores how labor unions are essential to all workers. Yet, union systems are badly flawed and in need of rapid changes for reform. Madland's multilayered analysis presents a solution—a model to replace the existing firm-based collective bargaining with a larger, industry-scale bargaining method coupled with powerful incentives for union membership.

These changes would represent a remarkable shift from the norm, but would be based on lessons from other countries, US history and current policy in several cities and states. In outlining the shift, Madland details how these proposals might mend the broken economic and political systems in the United States. He also uses three examples from Britain, Canada, and Australia to explore what there is yet to learn about this new system in other developed nations.

Madland's practical advice in Re-Union extends to a proposal for how to implement the changes necessary to shift the current paradigm. This powerful call to action speaks directly to the workers affected by these policies—the very people seeking to have their voices recognized in a system that attempts to silence them.

David Madland is Senior Fellow and Strategic Director of the American Worker Project at the Center for American Progress. He is author of Hollowed Out. Follow him on Twitter @DavidMadland.