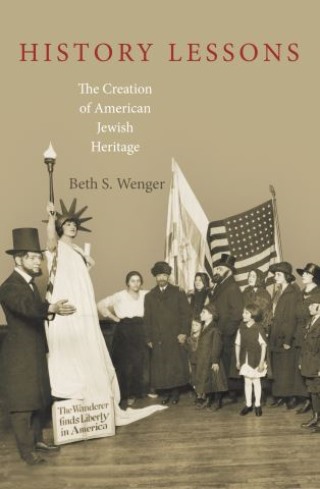 The Creation of American Jewish Heritage

Most American Jews today will probably tell you that Judaism is inherently democratic and that Jewish and American cultures share the same core beliefs and values. But in fact, Jewish tradition and American culture did not converge seamlessly. Rather, it was American Jews themselves who consciously created this idea of an American Jewish heritage and cemented it in the popular imagination during the late nineteenth and mid-twentieth centuries. History Lessons is the first book to examine how Jews in the United States collectively wove themselves into the narratives of the nation, and came to view the American Jewish experience as a unique chapter in Jewish history.

Beth Wenger shows how American Jews celebrated civic holidays like Thanksgiving and the Fourth of July in synagogues and Jewish community organizations, and how they sought to commemorate Jewish cultural contributions and patriotism, often tracing their roots to the nation's founding. She looks at Jewish children's literature used to teach lessons about American Jewish heritage and values, which portrayed--and sometimes embellished--the accomplishments of heroic figures in American Jewish history. Wenger also traces how Jews often disagreed about how properly to represent these figures, focusing on the struggle over the legacy of the Jewish Revolutionary hero Haym Salomon.

History Lessons demonstrates how American Jews fashioned a collective heritage that fused their Jewish past with their American present and future.

Beth S. Wenger: Beth S. Wenger is professor of history and director of the Jewish Studies Program at the University of Pennsylvania. She is the author of The Jewish Americans: Three Centuries of Jewish Voices in America and New York Jews and the Great Depression: Uncertain Promise.