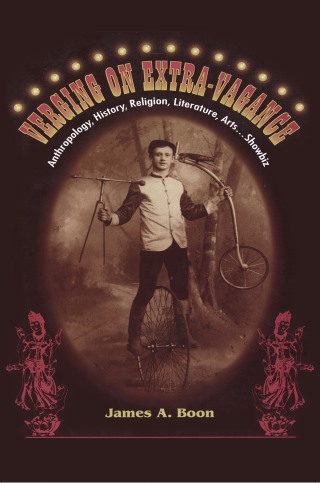 In this book, James Boon ranges through history and around the globe in a series of provocative reflections on the limitations, attractions, and ambiguities of cultural interpretation. The book reflects the unusual keyword of its title, extra-vagance, a term Thoreau used to refer to thought that skirts traditional boundaries. Boon follows Thoreau's lead by broaching subjects as diverse as Balinese ritual, Montaigne, Chaucer, Tarzan, Perry Mason, opera, and the ideas of Jacques Derrida, Ruth Benedict, Kenneth Burke, and Mary Douglas. He makes creative and often playful leaps among eclectic texts and rituals that do not hold single, fixed meanings, but numerous, changing, and exceedingly specific ones.


Boon opens by exploring links between ritual and reading, focusing on commentaries about the seclusion of menstruating women in Native American culture, trance dances in Bali, and circumcision (or lack of it) in contrasting religions. He considers the ironies of "first-person ethnography" by telling stories from his own fieldwork, reflecting on ethnological museums, and making seriocomic connections between Mark Twain and Marcel Mauss. In expansive discussions that touch on Manhattan and Sri Lanka, the Louvre and the "World of Coca-Cola" museum, willfully obscure academic theory and shamelessly commercial show business, Boon underlines the inadequacies of simple ideologies and pat generalizations. The book is a profound and eloquent exploration of cultural comparison by one of America's most original and innovative anthropologists.

James A. Boon: James A. Boon is Professor of Anthropology at Princeton University. His researches bridge Indonesian studies, Euro-American colonial and intellectual history, and philosophies of synaesthesic arts and experience. His works include From Symbolism to Structuralism, The Anthropological Romance of Bali, Other Tribes, Other Scribes, and Affinities and Extremes.