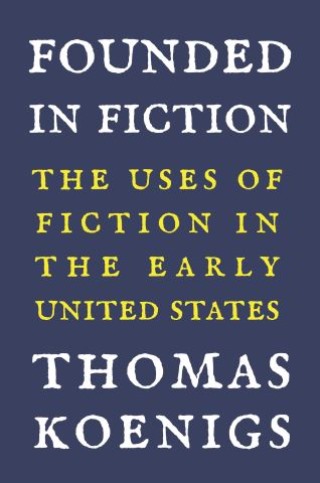 The Uses of Fiction in the Early United States

What is the use of fiction? This question preoccupied writers in the early United States, where many cultural authorities insisted that fiction-reading would mislead readers about reality. Founded in Fiction argues that this suspicion made early American writers especially attuned to one of fiction’s defining but often overlooked features—its fictionality. Thomas Koenigs shows how these writers explored the unique types of speculative knowledge that fiction could create as they sought to harness different varieties of fiction for a range of social and political projects.

Spanning the years 1789–1861, Founded in Fiction challenges the “rise of novel” narrative that has long dominated the study of American fiction by highlighting how many of the texts that have often been considered the earliest American novels actually defined themselves in contrast to the novel. Their writers developed self-consciously extranovelistic varieties of fiction, as they attempted to reform political discourse, shape women’s behavior, reconstruct a national past, and advance social criticism. Ambitious in scope, Founded in Fiction features original discussions of a wide range of canonical and lesser-known writers, including Hugh Henry Brackenridge, Royall Tyler, Charles Brockden Brown, Leonora Sansay, Catharine Maria Sedgwick, Edgar Allan Poe, Robert Montgomery Bird, George Lippard, Harriet Beecher Stowe, Frederick Douglass, and Harriet Jacobs.

By reframing the history of the novel in the United States as a history of competing varieties of fiction, Founded in Fiction shows how these fictions structured American thinking about issues ranging from national politics to gendered authority to the intimate violence of slavery.