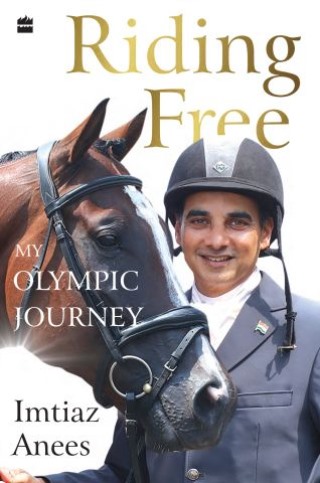 'My heart was pounding ... yet I was sitting still! This was the most exciting moment in my life and the culmination of my boyhood dream. I was where thousands of eventing riders around the world had dreamt of being-the Olympics.'

This is the story of a young boy with an impossible dream - competing at the Olympics. From the age of four, Imtiaz Anees took to horse-riding like fish to water. It soon became a passion, one that continued through his life, beginning with his first competitive win at the age of six, eventually winning multiple equestrian events both nationally and internationally. Imtiaz is the only Indian rider to complete an equestrian three-day event at the Olympics, in Sydney in 2000, at the age of thirty, in an elite sport long associated with royalty and wealth and primarily the army in India.

In Riding Free, Imtiaz re-traces the major milestones of his riveting twenty-year-long journey. The stories he tells are heartfelt, emotional and inspirational for the next generation of dreamers-a way to 'give back', in small measure, the enormous goodwill and help he received from all kinds of people in his Olympics journey. Behind Imtiaz's success are also the struggles and setbacks that pushed him to work harder and achieve peak performance. In a sport where the result depends on both man and animal, the deep bond Imtiaz shares with his horses will leave animal lovers spellbound. Here is a story that will inspire every athlete to 'never give in'.

Imtiaz Anees is an equestrian Olympian, trainer, competitor, NBC commentator, qualified Level 2 instructor and coach educator. As the only equestrian Olympian in India, he wants to share his knowledge and experience with all other riders and offers internship programmes to teach equine management. He runs an equestrian training centre—Seahorse Equestrian, a boutique stable with sixteen horses, located on a beautiful beach in a small fishing village in Nargol, Gujarat.