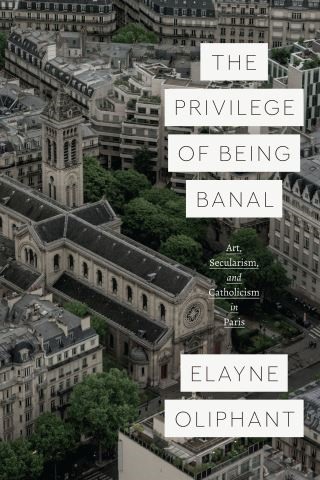 The Privilege of Being Banal

Art, Secularism, and Catholicism in Paris

France, officially, is a secular nation. Yet Catholicism is undeniably a monumental presence, defining the temporal and spatial rhythms of Paris. At the same time, it often fades into the background as nothing more than “heritage.” In a creative inversion, Elayne Oliphant asks in The Privilege of Being Banal what, exactly, is hiding in plain sight? Could the banality of Catholicism actually be a kind of hidden power?

Exploring the violent histories and alternate trajectories effaced through this banal backgrounding of a crucial aspect of French history and culture, this richly textured ethnography lays bare the profound nostalgia that undergirds Catholicism’s circulation in nonreligious sites such as museums, corporate spaces, and political debates. Oliphant’s aim is to unravel the contradictions of religion and secularism and, in the process, show how aesthetics and politics come together in contemporary France to foster the kind of banality that Hannah Arendt warned against: the incapacity to take on another person’s experience of the world. A creative meditation on the power of the taken-for-granted, The Privilege of Being Banal is a landmark study of religion, aesthetics, and public space.