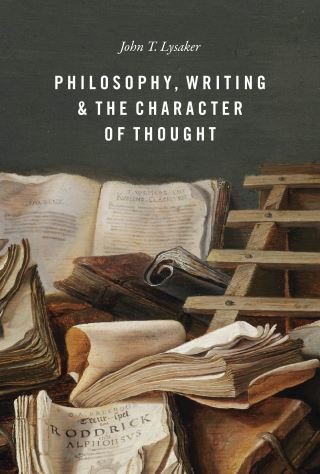 Philosophy, Writing, and the Character of Thought

Lysaker examines the relationship between philosophical thought and the act of writing to explore how this dynamic shapes the field of philosophy.

Philosophy’s relation to the act of writing is John T. Lysaker’s main concern in Philosophy, Writing, and the Character of Thought. Whether in Plato, Montaigne, Nietzsche, Wittgenstein, or Derrida, philosophy has come in many forms, and those forms—the concrete shape philosophizing takes in writing—matter. Much more than mere adornment, the style in which a given philosopher writes is often of crucial importance to the point he or she is making, part and parcel of the philosophy itself.

Considering how writing influences philosophy, Lysaker explores genres like aphorism, dialogue, and essay, as well as logical-rhetorical operations like the example, irony, and quotation. At the same time, he shows us the effects of these rhetorical devices through his own literary experimentation. In dialogue with such authors as Benjamin, Cavell, Emerson, and Lukács, he aims to revitalize philosophical writing, arguing that philosophy cannot fulfill its intellectual and cultural promise if it keeps to professional articles and academic prose. Instead, philosophy must embrace writing as an essential, creative activity, and deliberately reform how it approaches its subject matter, readership, and the evolving social practices of reading and reflection.

John T. Lysaker:
John T. Lysaker is the William R. Kenan Professor of Philosophy at Emory University. He is the author of many books, including After Emerson and You Must Change Your Life: Poetry, Philosophy, and the Birth of Sense.