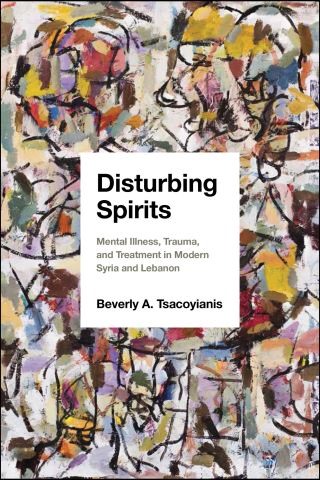 Mental Illness, Trauma, and Treatment in Modern Syria and Lebanon

This book investigates the psychological toll of conflict in the Middle East during the twentieth century, including discussion of how spiritual and religious frameworks influence practice and theory.

The concept of mental health treatment in war-torn Middle Eastern nations is painfully understudied. In Disturbing Spirits, Beverly A. Tsacoyianis blends social, cultural, and medical history research methods with approaches in disability and trauma studies to demonstrate that the history of mental illness in Syria and Lebanon since the 1890s is embedded in disparate—but not necessarily mutually exclusive—ideas about legitimate healing. Tsacoyianis examines the encounters between “Western” psychiatry and local practices and argues that the attempt to implement “modern” cosmopolitan biomedicine for the last 120 years has largely failed—in part because of political instability and political traumas and in part because of narrow definitions of modern medicine that excluded spirituality and locally meaningful cultural practices.

Analyzing hospital records, ethnographic data, oral history research, historical fiction, and journalistic nonfiction, Tsacoyianis claims that psychiatrists presented mental health treatment to Syrians and Lebanese not only as a way to control or cure mental illness but also as a modernizing worldview to combat popular ideas about jinn-based origins of mental illness and to encourage acceptance of psychiatry. Treatment devoid of spiritual therapies ultimately delegitimized psychiatry among lower classes. Tsacoyianis maintains that tensions between psychiatrists and vernacular healers developed as political transformations devastated collective and individual psyches and disrupted social order. Scholars working on healing in the modern Middle East have largely studied either psychiatric or non-biomedical healing, but rarely their connections to each other or to politics. In this groundbreaking work, Tsacoyianis connects the discussion of global responsibility to scholarly debates about human suffering and the moral call to caregiving. Disturbing Spirits will interest students and scholars of the history of medicine and public health, Middle Eastern studies, and postcolonial literature.

Beverly A. Tsacoyianis is an assistant professor of history at the University of Memphis.