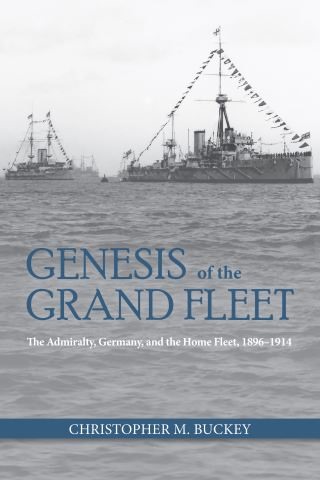 Genesis of the Grand Fleet

Genesis of the Grand Fleet: The Admiralty, Germany, and the Home Fleet, 1896–1914 tells the story of the prewar predecessor to the Royal Navy’s war-winning Grand Fleet: the Home Fleet. Established in early 1907 by First Sea Lord Sir John Fisher, the Home Fleet combined an active core of powerful armored warships with a unification of the various reserve divisions of warships previously under the control of the three Royal Navy home port commands. Fisher boasted that the new Home Fleet would be able to counter the growing German Hochseeflotte.​​ While these boasts were accurate, they were not the sole motivation behind the Home Fleet’s establishment. The Liberal Party’s landslide victory in the 1906 General Election made fiscal economy on the part of the Admiralty even more important than before, and this significantly influenced the Home Fleet’s creation.​ Subsequently the Home Fleet suffered a sustained campaign of criticism by the commander-in-chief of the Channel Fleet, Lord Charles Beresford. This campaign ruined many careers including Beresford’s and resulted in the assimilation of the Channel Fleet into the Home Fleet in 1909. From 1910 onward the Home Fleet steadily evolved and became the most important single command in the Royal Navy, and the Home Fleet’s successive commanders-in-chief had influence on strategic policy rivaled only by the Board of Admiralty. The last prewar commander of the Home Fleet, Admiral Sir George Callaghan achieved this influence by impressing the civilian head of the Admiralty, Winston Churchill. A driven reformer, Churchill’s influence was almost as important as Fisher’s.​ Against this backdrop of political drama, Genesis of the Grand Fleet: The Admiralty, Germany, and the Home Fleet, 1896–1914 explains how Britain maintained its maritime preeminence in the early twentieth century. As Christopher Buckey describes,​the fleet sustained Britain and her allies’ path to victory in World War I.​ ​