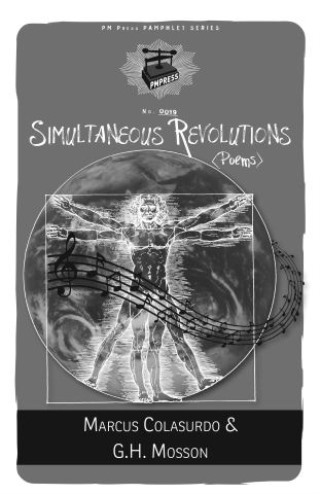 Simultaneous Revolutions offers a meeting place for individual expression in this plague year where, forced to look within and stay afar, people can do both with these companion poems. With poems about Bob Dylan, contemporary singer Grimes, the Clash, Dolores O’Riordan of the Cranberries, Allen Ginsberg, and also featuring voices from warehouse rave to the ignored alley, from the blurry highway to a couple’s river-walk to a calm man’s tilling, these poems offer a provocative panorama of our both ancient and neon times.

Headed down the wounded highway
like a nurse on the same road,
don’t know what the banners say today,
but sense the ill from the good.
—from “Soulphone Ringing”

Who hasn’t traveled the revolutions of living? What would that map look like, as varied people chart their own ways to harbor? Find out by checking out Simultaneous Revolutions. From the Lower East Side to the Lehigh River Gorge, from Standing Rock to Chesapeake Bay, from St. Louis to Vermont to San Francisco, Simultaneous Revolutions stands exactly at the broad confluence of a hundred nourishing, wild, wounded rivers—coming together—flowing to a gathering of power, becoming one.

G.H. Mosson is a poet, lawyer, activist, and author of three prior books of poetry. His poetry has appeared in The Hollins Critic, the Tampa Review, the Cincinnati Review, Measure, and also won fellowships from the Puffin Foundation and Johns Hopkins University. From 2003 to 2010, he edited Poems against War: A Journal of Poetry and Action (Wasteland Press).

Marcus Colasurdo is an underground “classic beat” poet who has published several books and given inspiring readings across venues of Maryland, Pennsylvania, Washington DC, Virginia, and California. He often combines art, music, and audience at performances to raise money for worthy causes.