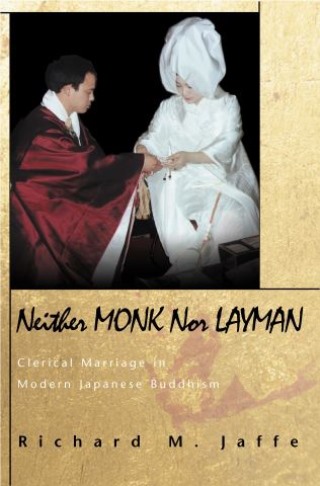 Neither Monk nor Layman

Buddhism comes in many forms, but in Japan it stands apart from all the rest in one most striking way--the monks get married. In Neither Monk nor Layman, the most comprehensive study of this topic in any language, Richard Jaffe addresses the emergence of an openly married clergy as a momentous change in the history of modern Japanese Buddhism. He demonstrates, in clear and engaging prose, that this shift was not an easy one for Japanese Buddhists. Yet the transformation that began in the early Meiji period (1868-1912)--when monks were ordered by government authorities to adopt common surnames and allowed to marry, to have children, and to eat meat--today extends to all the country's Buddhist denominations.


Jaffe traces the gradual acceptance of clerical marriage by Japanese Buddhists from the premodern emergence of the "clerical marriage problem" in the Edo period to its widespread practice by the start of the Second World War. In doing so he considers related issues such as the dissolution of clerical status and the growing domestication of Japanese temple life. This book reveals the deep contradictions between sectarian teachings that continue to idealize renunciation and a clergy whose lives closely resemble those of their parishioners in modern Japanese society. It will attract not only scholars of religion and of Japanese history, but all those interested in the encounter-conflict between regimes of modernization and religious institutions and the fate of celibate religious practices in the twentieth century.