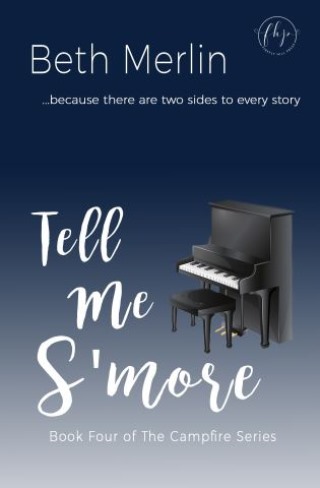 “A beautifully written contemporary romance, with plenty of enjoyable comedy, it challenges us to evaluate our lives and make big decisions on who we want to be and not necessarily what everyone expects us to be.” – Adventures in Lit about The Campfire Series

*PUBLISHER'S NOTE: Though this book should be read FOURTH in the series, this "piece of the story" is actually set between books 1 and 2 (One S'more Summer and S'more to Lose). So sort of like Book 1.5! We highly recommend that if it is your first time through the series to read it fourth. Enjoy!**

Camp Chinooka was supposed to be a place of inspiration, the place where Perry Gilman would finally compose his symphonic masterpiece. But four years later, Perry Gillman isn't any closer to his dream of becoming a world renowned musician. Instead, he fell love in with Gigi Goldstein and he thought that love would be enough. Now, struggling to find the right subject for a new musical while hustling as a piano player at a local jazz bar, he can't help but measure his own shortcomings to his famous father's monstrous success. So, when he stumbles onto the idea to write a musical about the life and times of Elizabeth I, everything finally changes. The musical is an international sensation and suddenly, Perry is on the fast track to super stardom.

However, fame and success come at a price. When his relationship with Gigi is thrown into a tailspin, he must decide whether to follow his dream for which he fought for so long or sacrifice it all for true love.

Told from Perry's perspective, Tell Me S’more nestles in the timeline between One S'more Summer and S'more to Lose and shows that there are two sides to every story and a cost to every choice.


Praise for The Campfire Series

“While any of the books can be read individually, all three are amazing reads, and complement one another so well, it’s worth it to read the series in its entirety. All three received a much-deserved five stars from me!” – Chick Lit Central

"While a lot of the other "beach read" romances I've read as of late fall firmly in the "formulaic and predictable" category, One S'More Summer is one of those rare finds that is a delightful departure... I'm honestly quite impressed it came from a first time author, Beth Merlin." - Only True Magic

"What I thought was going to be just another summer romance story turned out to be so much more..." - Mama's Dirty Little Reads

“I finished this book smiling, loving how the author wrapped everything up. This is a sweet little romance series, one that I think needs much more recognition and attention than it gets!” – Lisa Loves Literature

“Merlin gives off Sophie Kinsella and Emily Giffin vibes only with an execution of plots that is all her own. Fans of the two authors will appreciate the prose and relationships and style of this series. They will, of course, recognize it is something all Beth Merlin…. (Beth Merlin is totally going to grow in popularity. I'm calling it.)” –Books and Broadway

Beth Merlin: Beth Merlin has a BA from The George Washington University where she minored in Creative Writing and a JD from New York Law School. She’s a native New Yorker who loves anything Broadway, her beautiful daughter, and a good maxi dress. She was introduced to her husband through a friend she met at sleepaway camp and considers the eight summers she spent there to be some of the most formative of her life. When Beth finds a moment of free time, she loves to read books by the authors who've most influenced her work, like Sophie Kinsella, Emily Giffin, and JoJo Moyes.