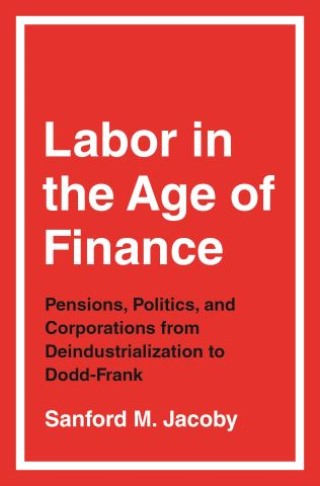 Labor in the Age of Finance

Pensions, Politics, and Corporations from Deindustrialization to Dodd-Frank

From award-winning economic historian Sanford M. Jacoby, a fascinating and important study of the labor movement and shareholder capitalism

Since the 1970s, American unions have shrunk dramatically, as has their economic clout. Labor in the Age of Finance traces the search for new sources of power, showing how unions turned financialization to their advantage.

Sanford Jacoby catalogs the array of allies and finance-based tactics labor deployed to stanch membership losses in the private sector. By leveraging pension capital, unions restructured corporate governance around issues like executive pay and accountability. In Congress, they drew on their political influence to press for corporate reforms in the wake of business scandals and the financial crisis. The effort restrained imperial CEOs but could not bridge the divide between workers and owners. Wages lagged behind investor returns, feeding the inequality identified by Occupy Wall Street. And labor’s slide continued.

A compelling blend of history, economics, and politics, Labor in the Age of Finance explores the paradox of capital bestowing power to labor in the tumultuous era of Enron, Lehman Brothers, and Dodd-Frank.

Sanford M. Jacoby: Sanford M. Jacoby is Distinguished Research Professor of History, Management, and Public Affairs at the University of California, Los Angeles. His books include Modern Manors: Welfare Capitalism since the New Deal and The Embedded Corporation: Corporate Governance and Employment Relations in Japan and the United States (both Princeton).