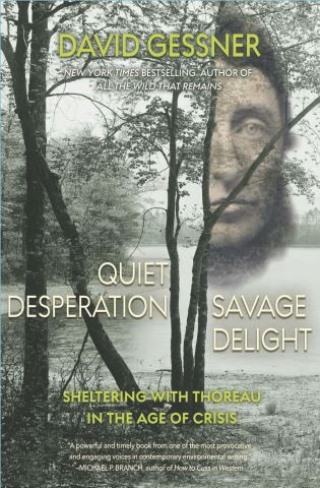 Sheltering with Thoreau in the Age of Crisis

•Author's book All the Wild That Remains was a New York Times bestseller and selected for inclusion in Outside's "new canon of adventure writing"
•Offers a unique and timely perspective on the pandemic. The issues of the last six months are the issues of the book, from social distancing to race to the re–wilding that came about when people stopped flying and driving so much
•Explores Henry David Thoreau beyond the popularly presented cliché. Thoreau was not all flowers and acorns, and this man, who died at 42, had some profound and sturdy thoughts not just about nature but about death and disaster, too

David Gessner: DAVID GESSNER is the author of eleven books that blend a love of nature, humor, memoir, and environmentalism, including Leave it As it Is: A Journey Through Theodore Roosevelt's American Wilderness and the New York Times–bestselling All the Wild That Remains: Edward Abbey, Wallace Stegner and the American West and the prize–winning The Tarball Chronicles. In 2003 Gessner taught environmental writing as a Briggs–Copeland Lecturer at Harvard, and he now serves as chair of the Creative Writing Department at the University of North Carolina Wilmington, where he is also the founder and editor–in–chief of the literary magazine Ecotone. His prizes include a Pushcart Prize, the John Burroughs Award for Best Nature Essay, the Association for Study of Literature and the Environment's award for Best Book of Creative Writing, and the Reed Award for Best Book on the Southern Environment. In 2017 he hosted the National Geographic Explorer show, "The Call of the Wild." Gessner lives in Wilmington, North Carolina, with his wife, the novelist Nina de Gramont, and their daughter, Hadley.