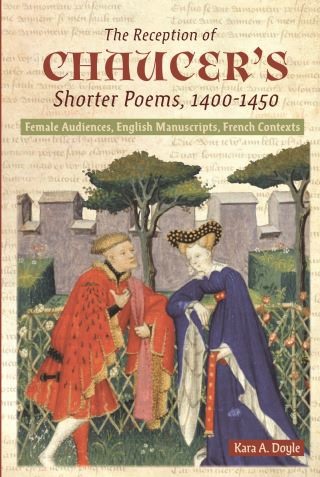 Readers have disagreed for centuries about the way Chaucer represented female voices in his Hous of Fame, Parliament of Foules, Anelida and Arcite, Legend of Good Women, and Book of the Duchess;but little attention has hitherto been paid to the earliest manuscript contexts in which these poems appear -- a gap which this study aims to fill. It demonstrates that, even in unrelated manuscripts, Chaucer's earliest compilersrepeatedly create for these poems a mixed-gender audience well versed in the lively French poetic conversation about the problem of a lack of interest on a woman's part: can she legitimately refuse the advances of her suitor on the grounds that men's fin'amors language cannot be trusted? By highlighting this French controversy and its echoes in the English poetry of Chaucer, Hoccleve, Lydgate, Roos, and others, these manuscript compilers constructa Chaucer who participates posthumously in an ongoing literary debate about female voice, female agency, female scepticism, and the false promises of male fin'amors suitors. This book also expands understanding of Chaucer'searly reception by showing how the manuscript context of his shorter poems painted a French-centred, woman-friendly picture of his literary interests - a picture that some early printers would subsequently find difficult, and, inextreme cases, actively work to dismiss.

KARA A. DOYLE is Associate Professor of English at Union College in Schenectady, New York.

Kara A. Doyle: KARA A. DOYLE is Associate Professor of English at Union College in Schenectady, New York.