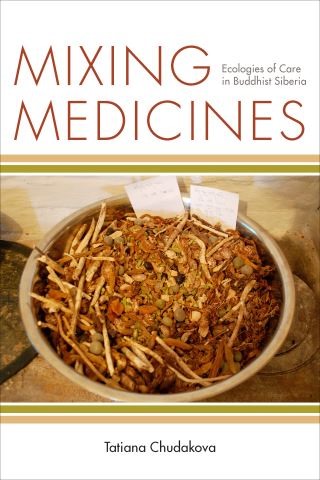 Ecologies of Care in Buddhist Siberia

Traditional medicine enjoys widespread appeal in today’s Russia, an appeal that has often been framed either as a holdover from pre-Soviet times or as the symptom of capitalist growing pains and vanishing Soviet modes of life. Mixing Medicines seeks to reconsider these logics of emptiness and replenishment. Set in Buryatia, a semi-autonomous indigenous republic in Southeastern Siberia, the book offers an ethnography of the institutionalization of Tibetan medicine, a botanically-based therapeutic practice framed as at once foreign, international, and local to Russia’s Buddhist regions.

By highlighting the cosmopolitan nature of Tibetan medicine and the culturally specific origins of biomedicine, the book shows how people in Buryatia trouble entrenched center-periphery models, complicating narratives about isolation and political marginality. Chudakova argues that a therapeutic life mediated through the practices of traditional medicines is not a last-resort response to sociopolitical abandonment but depends on a densely collective mingling of human and non-human worlds that produces new senses of rootedness, while reshaping regional and national conversations about care, history, and belonging.