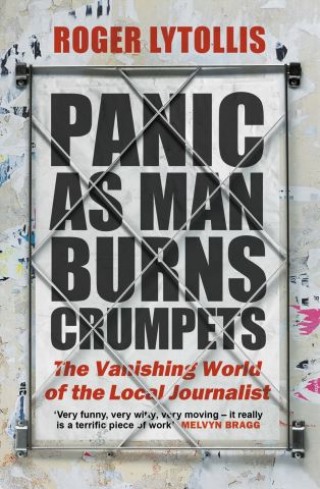 The Vanishing World of the Local Journalist

'For those who know about provincial newspapers, this will be a classic and a gem. Those who don't know will envy what they have missed'
MELVYN BRAGG

'Brisk and entertaining. A very readable love letter to a disappearing world, told with verve and tenderness'
STUART MACONIE, author of Pies and Prejudice

'Local journalism has never seemed more exotic than in this part-memoir, part-ode to that disappearing art, which is as funny as it is endearing . . . Told with a tender fondness, the bonkers, baffling but vital world of local press is paraded with the style that it deserves'
JONATHAN WHITELAW, Sun

'Local publishers . . . need to hold on to thoughtful, dedicated writers such as Roger Lytollis, or his book will be an epitaph to a centuries-old industry'
IAN BURRELL, i paper

'Anyone who has ever worked at a local newspaper, or wondered what it is like, should read this book'
DOMINIC PONSFORD, media editor at New Statesman Media Group/editor-in-chief at Press Gazette

'[Lytollis] writes with clarity, comically self-effacing honesty and surprising poignancy . . . [this is] the story of what it is like to love what you do, and be great at it, and to watch it collapse around you in slow motion'
ROBYN VINTER, Guardian

'For anyone wondering where their local press went, this is as clear an account of how it was pickpocketed, drained of blood, and left to die as you'll find'
ED NEEDHAM, Strong Words magazine

'Panic as Man Burns Crumpets gives a powerful, if not to say dismaying, overview of an industry in terminal decline'
NAT SEGNIT, Times Literary Supplement

You dreamed of being a journalist and the dream has come true. You love working for your local paper . . . although not everything is as you imagined.


You embarrass yourself with a range of celebrities, from John Hurt to Jordan. Your best story is 'The Man With the Pigeon Tattoo'.


A former colleague interviews President Trump. You urinate in the president of the Mothers' Union's garden.

Your appearance as a hard-hitting columnist on a BBC talk show does not go well. And being photographed naked is only the second most humiliating thing to happen one infamous afternoon.

There are serious stories, such as a mass shooting, a devastating flood, and the search for Madeleine McCann.

Meanwhile local papers are dying. Your building is crumbling and your readership is dwindling. Your carefully crafted features are read by fewer people than a story about fancy dress for dogs.

Panic as Man Burns Crumpets is the inside story of local newspapers during the past twenty-five years, told in a way that's funny, poignant and revealing.

Roger Lytollis: ROGER LYTOLLIS is the author of Panic as Man Burns Crumpets: The Vanishing World of the Local Journalist and On a Pedestal: A Trip Around Britain's Statues. Since 1995 Roger has been a feature writer and columnist for some of the UK's best local newspapers. He's a three-time winner at the Regional Press Awards. And a twelve-time loser at the North West Media Awards. He isn't bitter about that at all. Roger lives in Cumbria. Twitter: @rogerlytollis