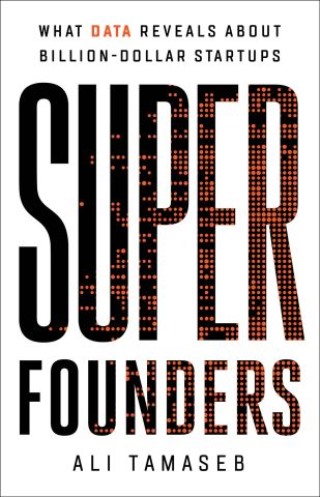 What Data Reveals About Billion-Dollar Startups

Super Founders uses a data-driven approach to understand what really differentiates billion-dollar startups from the rest—revealing that nearly everything we thought was true about them is false!

Ali Tamaseb has spent thousands of hours manually amassing what may be the largest dataset ever collected on startups, comparing billion-dollar startups with those that failed to become one—30,000 data points on nearly every factor: number of competitors, market size, the founder’s age, his or her university’s ranking, quality of investors, fundraising time, and many, many more. And what he found looked far different than expected. Just to mention a few:

Packed with counterintuitive insights and inside stories from people who have built massively successful companies, Super Founders is a paradigm-shifting and actionable guide for entrepreneurs, investors, and anyone interested in what makes a startup successful.

Ali Tamaseb: Ali Tamaseb is a partner at DCVC, a highly reputable VC firm in Silicon Valley with over $2 billion under management and investments in over ten billion-dollar startups. He holds several leadership and board positions at companies across the U.S. and globally. Ali was an honoree of the British Alumni Award of 2018 by the British Council, and Imperial College President's Medal for Outstanding Achievement. Ali and his work has been featured in BBC, TED, Guardian, Forbes, Fortune, Inc., The Telegraph, among others, and he has given talks and appeared on panels at major events and conferences.