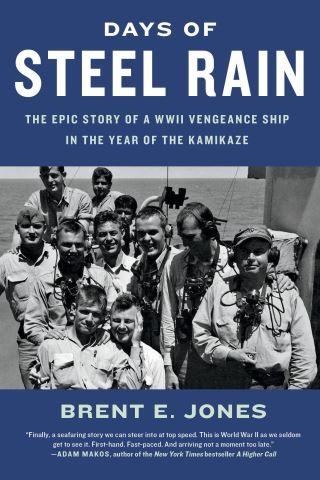 An intimate true account of Americans at war, Days of Steel Rain is an epic drama about an unlikely group of men forced to work together in the face of an increasingly desperate enemy during the final year of World War II.

Sprawling across the Pacific, this untold story follows the crew of the newly-built "vengeance ship" USS Astoria, named for her sunken predecessor lost earlier in the war. At its center lies U.S. Navy Captain George Dyer, who vowed to return to action after suffering a horrific wound. He accepted the ship's command in 1944, knowing it would be his last chance to avenge his injuries and salvage his career. Yet with the nation's resources and personnel stretched thin by the war, he found that just getting the ship into action would prove to be a battle.
Tensions among the crew flared from the start. Astoria's sailors and Marines were a collection of replacements, retreads, and older men. Some were broken by previous traumatic combat, most had no desire to be in the war, yet all found themselves fighting an enemy more afraid of surrender than death.
The reluctant ship was called to respond to challenges that its men never could have anticipated. From a typhoon where the ocean was enemy to daring rescue missions, a gallant turn at Iwo Jima, and the ultimate crucible against the Kamikaze at Okinawa, they endured the worst of the final year of the war at sea.
Days of Steel Rain brings to life more than a decade of research and firsthand interviews, depicting with unprecedented insight the singular drama of a captain grappling with an untested crew and men who had endured enough amidst some of the most brutal fighting of World War II. Throughout, Brent Jones fills the narrative with secret diaries, memoirs, letters, interpersonal conflicts, and the innermost thoughts of the Astoria men--and more than 80 photographs that have never before been published. Days of Steel Rain weaves an intimate, unforgettable portrait of leadership, heroism, endurance, and redemption.

Brent E. Jones: Brent Jones holds a BA in Economics from University of Texas at Austin and an MBA from Southern Methodist University in Dallas. After 20 years in business operations and corporate writing, he became a full-time writer. He was awarded the 2017 Mayborn Literary Conference Personal Essay prize and his work has appeared in World War II Magazine and US Navy Cruiser Sailors' Association magazine. Days of Steel Rain is his first book and the culmination of a decade of research.