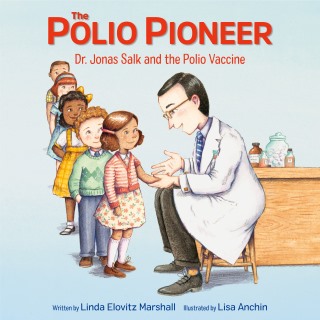 A SYDNEY TAYLOR NOTABLE BOOK • Learn about the importance of vaccines and the scientific process through the fascinating life of world-renowned scientist Jonas Salk, whose pioneering discoveries changed the world forever.

Dr. Jonas Salk is one of the most celebrated doctors and medical researchers of the 20th century. The child of immigrants who never learned to speak English, Jonas was struck by the devastation he saw when the soldiers returned from battle after WWII. Determined to help, he worked to become a doctor and eventually joined the team that created the influenza vaccine. But Jonas wanted to do more. As polio ravaged the United States--even the president was not immune!--Jonas decided to lead the fight against this terrible disease. In 1952, Dr. Jonas Salk invented the polio vaccine, which nearly eliminated polio from this country. For the rest of his life, Dr. Salk continued to do groundbreaking medical research at the Salk Institute, leaving behind a legacy that continues to make the world a better place every day.

Lisa Anchin has been drawing since she could hold a pencil and making up stories since she could speak. She received her BA from Smith College and took a long circuitous route to an MFA at the School of Visual Arts in New York. She is often holed up in her studio stringing words together and compulsively doodling, but she also loves meeting other kidlit folks and volunteers as the Illustration Coordinator for SCBWI's Metro NY Chapter. She is the illustrator of A PENGUIN NAMED PATIENCE by Suzanne Lewis (Sleeping Bear Press 2015) and I WILL LOVE YOU by Alyssa Satin Capucilli (Scholastic 2017). Her first author/illustrated title, THE LITTLE GREEN GIRL, was published in 2019. Lisa lives in Brooklyn with her husband, daughter, and their two studio cats.