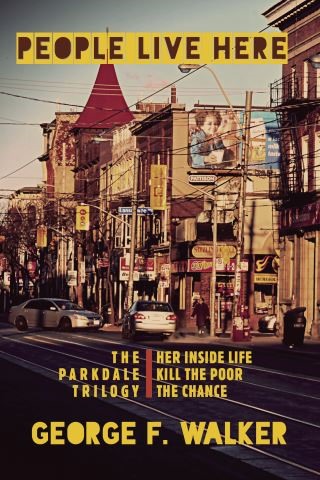 The Parkdale Trilogy: The Chance, Her Inside Life, and Kill the Poor

People Live Here is a collection of three exciting new plays by George F. Walker, Canada’s king of black comedy and a winner of two Governor General’s Literary Awards for Drama. The Chance is a funny, quirky, and suspenseful play portraying three aspiring but economically deprived women living in a working-class neighbourhood of Toronto. The serendipitous discovery of a $300,000 cheque left behind by one of Jo’s one-night stands sends Jo’s mother Marcie, optimistic but exhausted, and stripper Amie, Jo’s friend and colleague, into a furious conjectures on how to use the money (if at all). Her Inside Life is a heartwarming story introducing Violet, an unbalanced widow under house arrest for committing a serious crime and looking to regain the respect of her daughter and her social worker, who visit regularly. The reappearance of Leo – a man Violet thought she had killed – offers an odd opportunity for the main character to show she doesn’t belong in the madhouse. Kill the Poor, this collection’s last chapter, is an intense comedy portraying a couple struggling for money and recuperating from a serious car accident. But what if the expected settlement changes the couple’s life for the better? A hired detective and the building’s custodian provide help, but the mysterious driver of the other car makes a comeback … for the worse. Altogether, George F. Walker’s People Live Here complete the Parkdale Palace trilogy of plays dealing with issues of social justice and allying heart, humour, and a contemporary reflection on human inequalities.

George F. Walker: George F. Walker has been one of Canada’s most prolific and popular playwrights since his career in theatre began in the early 1970s. His first play, The Prince of Naples, premiered in 1972 at the newly opened Factory Theatre, a company that continues to produce his work. Since that time, he has written more than twenty plays and has created screenplays for several award-winning Canadian television series. Part Kafka, part Lewis Carroll, Walker’s distinctive, gritty, fast-paced comedies satirize the selfishness, greed, and aggression of contemporary urban culture. Among his best-known plays are Gossip (1977); Zastrozzi, the Master of Discipline (1977); Criminals in Love (1984); Better Living (1986); Nothing Sacred (1988); Love and Anger (1989); Escape from Happiness (1991); Suburban Motel (1997, a series of six plays set in the same motel room); and Heaven (2000). Since the early 1980s, he has directed most of the premieres of his own plays. Many of Walker’s plays have been presented across Canada and in more than five hundred productions internationally; they have been translated into French, German, Hebrew, Turkish, Polish, and Czechoslovakian. During a ten-year absence from theatre, he mainly wrote for television, including the television series Due South, The Newsroom, This Is Wonderland, and The Line, as well as for the film Niagara Motel (based on three plays from his Suburban Motel series). Walker returned to the theatre with And So It Goes (2010). Awards and honours include Member of the Order of Canada (2005); National Theatre School Gascon-Thomas Award (2002); two Governor General’s Literary Awards for Drama (for Criminals in Love and Nothing Sacred); five Dora Mavor Moore Awards; and eight Chalmers Canadian Play Awards.