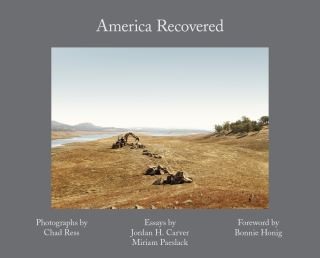 America Recovered reveals the point where abstract political processes manifest themselves in the physical world, thus providing an alternate means of experiencing the contemporary American landscape. Collectively, the images and essays show what aspects of our everyday lives are being assigned value in the promise of a recovered America.
America Recovered collects forty images that mark one of the only efforts to document the breadth of projects funded by the 2009 American Recovery and Reinvestment Act. Unlike the New Deal and other programs designed for employment and infrastructural development, the Recovery Act was passed without any funds dedicated for photographic documentation. Using an official government website as his guide, Chad Ress took photographs of projects across the country. The publication of America Recovered at this moment allows for a critical reassessment of the Act and its lasting impact on the American landscape.
The two essays by architectural writer Jordan H. Carver and photography historian Miriam Paeslack situate Ress’s photographs within broader discourses of urbanism, infrastructure, and politics. The question of what role the government should play in everyday life remains one of the touchstone issues in American politics. The photographs and essays ask a different set of questions, not whether government spending is good or bad, whether it worked or didn’t, but what, exactly does government spending look like. And importantly, America Recovered asks how government spending and civic identity are constructed around place.

Chad Ress: Chad Ress was born in Louisville, Kentucky and lives in Los Angeles, California. Ress works in both commercial and documentary photography. Recent clients include Harper’s Magazine, MIT Technology Review, Pirelli F1, Newsweek, Liberty Mutual, and Ford. His work has been recognized in Photo District News , American Photography , Communication Arts , The International Photography Awards, The One Show, D&AD Awards, and The Cannes Advertising Festival. Ress first became interested in photography under the influence of the extensive archive of FSA photographs in Lousiville’s Speed Museum.|||Jordan H. Carver is a writer, researcher, and educator who writes on space, politics, and culture. His first book, Spaces of Disappearance: The Architecture of Extraordinary Rendition is forthcoming from Urban Research (UR). He is a contributing editor to the Avery Review, a core member of Who Builds Your Architecture? and a Henry M. MacCracken Doctoral Fellow in American Studies at New York University.