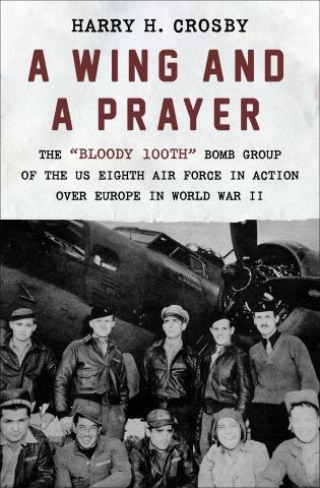 A Wing and a Prayer

“Written from the unusual perspective of a navigator, this is a compelling account of the air war against Germany.” —Publishers Weekly

They began operations out of England in the spring of ’43. They flew their Flying Fortresses almost daily against strategic targets in Europe in the name of freedom. Their astonishing courage and appalling losses earned them the name that resounds in the annals of aerial warfare and made the “Bloody Hundredth” a legend.

Harry H. Crosby—soon to be portrayed by Anthony Boyle in the miniseries Masters of the Air developed by Tom Hanks and Steven Spielberg—arrived with the very first crews, and left with the very last. After dealing with his fear and gaining in skill and confidence, he was promoted to Group Navigator, surviving hairbreadth escapes and eluding death while leading thirty-seven missions, some of them involving two thousand aircraft. Now, in a breathtaking and often humorous account, he takes us into the hearts and minds of these intrepid airmen to experience both the triumph and the white-knuckle terror of the war in the skies.

“Affecting . . . A vivid account . . . Uncommonly thoughtful recollections that address the moral ambiguities of a great cause without in any way denigrating the selfless valor or camaraderie that helped ennoble it.” —Kirkus Reviews

“Re-creates for us the sense of how it was when European skies were filled with noise and danger, when the fate of millions hung in the balance. An evocative and excellent memoir.” —Library Journal

“The acrid stench of fear and cordite, the coal burning stoves, the heroics, the losses . . . This has to be the best memoir I have read, bar none.” —George Hicks, director of the Airmen Memorial Museum

Harry H. Crosby: Harry H. Crosby, a navigator flying B-17 bombers with the “Bloody 100th” Bomb Group of the US Eighth Air Force during World War II, was one of the few survivors from the legendary unit, which flew missions almost daily against strategic targets all over Europe. For his service, he was awarded the Distinguished Flying Cross, Bronze Star, and Croix de Guerre, among many other honors.

Crosby was born in North Dakota in 1919 and raised in Iowa. He received his Masters from the University of Iowa and his PhD from Stanford University. He was a professor of rhetoric at Boston University until his retirement in 1984. In addition to A Wing and a Prayer, Crosby authored and coauthored multiple textbooks on college writing. Drawing upon his combined military and university experience, he developed curriculum at the US Air Force Academy. Crosby died in Massachusetts in 2010.