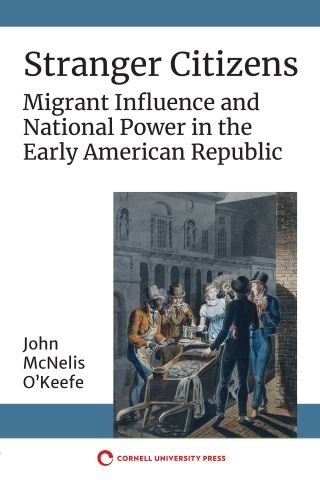 Migrant Influence and National Power in the Early American Republic

Stranger Citizens examines how foreign migrants who resided in the United States gave shape to citizenship in the decades after American independence in 1783. During this formative time, lawmakers attempted to shape citizenship and the place of immigrants in the new nation, while granting the national government new powers such as deportation.

John McNelis O'Keefe argues that despite the challenges of public and official hostility that they faced in the late 1700s and early 1800s, migrant groups worked through lobbying, engagement with government officials, and public protest to create forms of citizenship that worked for them. This push was made not only by white men immigrating from Europe; immigrants of color were able to secure footholds of rights and citizenship, while migrant women asserted legal independence, challenging traditional notions of women's subordination.

Stranger Citizens emphasizes the making of citizenship from the perspectives of migrants themselves, and demonstrates the rich varieties and understandings of citizenship and personhood exercised by foreign migrants and refugees. O'Keefe boldly reverses the top-down model wherein citizenship was constructed only by political leaders and the courts.

Thanks to generous funding from the Sustainable History Monograph Pilot and the Mellon Foundation the ebook editions of this book are available as Open Access (OA) volumes from Cornell Open (cornellopen.org) and other Open Access repositories.