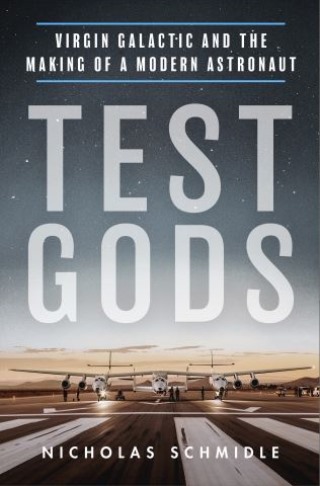 Virgin Galactic and the Making of a Modern Astronaut

In the spirit of The Right Stuff, updated for the 21st century, Test Gods is an epic story about extreme bravery and sacrifice, about the thin line between lunacy and genius. Most of all, it is a story about the pursuit of meaning in our lives—and the fulfillment of our dreams.

Along the way, Schmidle weaves his relationship with his father—a former fighter pilot and decorated war hero—into the tragedies and triumphs that Branson’s team confronts out in the Mojave desert as they design, build, and test-fly their private rocket ship. Gripping and novelistic, Test Gods leads us, through human drama, into a previously unseen world—and beyond.

Nicholas Schmidle: Nicholas Schmidle writes for the New Yorker and is the author of To Live or to Perish Forever: Two Tumultuous Years in Pakistan. His work has also appeared in the New York Times Magazine, the Atlantic, Slate, the Washington Post, and many others. Schmidle has been a National Magazine Award finalist, a two-time Livingston Award finalist, and winner of a Kurt Schork Award. He is a former fellow at the Institute of Current World Affairs, the New America Foundation, and the Woodrow Wilson International Center for Scholars and a former resident at the Rockefeller Foundation’s Bellagio Center. In 2017, Schmidle was a Ferris Professor of Journalism at Princeton University. He currently lives in London with his family.