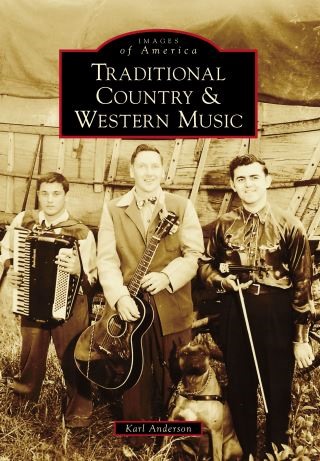 Traditional Country & Western Music presents historical photographs, memorabilia, and stories about an enduring music genre that took root in America from the late 1920s through the mid-1930s. Although many of our early folk songs originated from the British Isles, Jimmie Rodgers (the "Father of Country Music") and Gene Autry ("America's Favorite Singing Cowboy") became the foundation of modern country and western music. Many regional styles and variations of country and western music developed during the first half of the 20th century, including hillbilly, bluegrass, honky-tonk, rockabilly, southern gospel, Cajun, and Texas swing. Local artists, live radio shows, and regional barn dance programs provided entertainment throughout the Great Depression, World War II, and into America's postwar years. During the 1950s, country and western music became homogenized with the Nashville sound and the Bakersfield sound. By the end of the 1960s, country music completed its move to Nashville, and "western" was dropped from the equation. This book recalls the golden age of country and western music from the late 1920s through the 1960s. Each of the featured artists and programs in this book were once household names. We celebrate these early legends, live radio and television shows, unsung heroes, and local performers from Maine to California.

Karl Anderson: Karl Anderson and his family have lived in Palm Springs for more than 40 years. He is an avid collector of American history, art, antiques, guitars, and memorabilia. This book reflects Karl's personal interests as a songwriter and guitar player, as well as his passion for traditional country music.