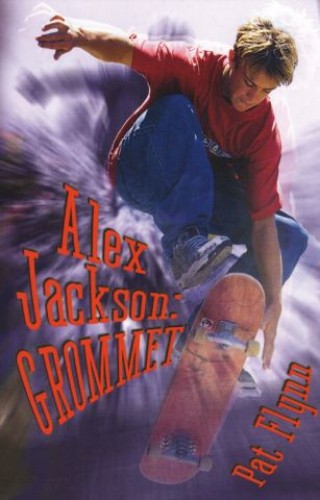 A raucous, riotous, devilish, urgent tale of a thirteen-year-old grommet, Alex. Alex, still learning to ride a skateboard, is disarmingly witty, naughty and sweet natured. He is the type of boy who kisses his mother meaningfully on the cheek before bedtime and enjoys cracking jokes with his mates down at the skate park. This is a fast-paced school adventure story that perfectly captures the essence of puberty and first love.

Pat Flynn: Pat Flynn grew up running around an old dairy farm in Queensland before moving to the Australian Institute of Sport in Canberra on a tennis scholarship. After playing and coaching on the professional circuit he became a teacher, where his observations of young people – their interests and stories – led to him writing a series about a teenage skateboarder called Alex Jackson. Pat now writes full time and lives on the Sunshine Coast. To the Light was shortlisted for the 2006 CBCA Book Awards, and The Tuckshop Kid received an Honour Book prize in the 2007 Awards, as well as being shortlisted for the QLD Premier’s Award. Flynn’s young adult novel The Line Formation was released in America in 2008 (titled Out of His League), making the PSLA top forty list of 2009. His latest books include The Adventures of Danny Series, and The Toilet Kid, the companion book to The Tuckshop Kid. Pat likes to start the day with a surf and end it walking along the beach with his wife and son. He also enjoys the occasional game of tennis.